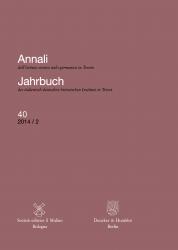 Antonino De Francesco - 1814. Der Untergang des Königreichs Italien
During the Congress of Vienna, the Austrian diplomacy considered the dominion of the Italian peninsula of fundamental importance for establishing Habsburg primacy in continental Europe. It was an ancient aspiration, which—despite the several defeats suffered by Napoleon—the Habsburg never gave up and they started accomplishing it during the Italian military campaign of 1814. On that occasion, Metternich succeeded convincing Napoleon’s stepson, Eugène de Beauharnais, viceroy of the Kingdom of Italy, to open the way to Milan to the Austrian troops. In so doing, he could anticipate his allies, both the British troops led by Lord Bentinck and the king of Naples, Joachim Murat, and thus reestablish Austrian rule in Lombardy. A reappraisal of the political game played during the 1814 military campaign in Northern Italy shows how that conclusion clashed with the Italian hopes for independence and it may explain why the consequences of the Austrian victory were so exacting on the Italian peninsula of the nineteenth-century.

Giovanni Orsina - Die Krise des liberalen Italiens. Die Rolle der Institutionen
This essay analyzes the crisis of the Italian liberal regime in the early 1920s by adopting an institutional perspective. Before the Great War, the Italian political system had reached a peculiar but relatively stable condition. This stability—which the essay describes in its first section—was based on a number of premises: a limited suffrage; the hegemony of the liberals; the absence of organized parties, or their limited and marginal role; the political relevance of the monarch. The liberal legal culture interpreted and at the same time legitimized this set of institutional arrangements. The second section of the essay describes how the Great War destroyed the elements mentioned before: universal manhood suffrage was introduced, the liberals lost their hegemonic position, organized parties—notably the People’s Party and the Socialists—were formed or grew in importance. The old rules that had governed the system until then did not hold any longer. However, the resilience of the liberal legal culture as well as the electoral and political relevance that the liberals were capable of preserving prevented the Italian political system from reaching a new stability based on organized parties—as is demonstrated by the lively political and constitutional debate of the early 1920s, notably on the new parliamentary regulations introduced in the Summer of 1920. The resulting institutional instability must be considered one of the factors that led to the fascist seizure of power.

Roberto Pertici - «Kräfte des Krieges» und «Kräfte der Revolution»in der italienischen Politik zwischen Libyenkrieg und Kriegseintritt
In his famous lectures in Oxford in 1929, Élie Halévy elaborated an interpretation of the global crisis of 1914-1918. He attempted «to define the collective forces, the collective feelings and movements of public opinion, which, in the early years of the twentieth century, made for strife», in other words, to break both the internal balance of the European countries and the international one. Halévy identified them in the forces pressing to war and those aiming at revolution. He acutely noticed the «striking resemblance» and correlation that started between them. The paper outlines the action of these forces in the Italian political framework from the Libyan war up to the Italian intervention in World War I, when the system of notables, which had ruled the country in the first fifty years after the Unification, started to show clear signs of crisis. The collective forces calling for war and some of those aiming at revolution fought in the streets and in the newspapers for the entry of Italy into the conflict to break an already precarious balance in Italy and in Europe: each of them, of course, hoped for a different outcome of such a break. Salandra’s liberal-conservatives pointed to war and victory to confirm the centrality of liberal politicians who were concerned about the crisis of their grip on society. As it almost always happens in history, the war had unintended consequences and opened a new phase, in which, however, it is possible to find certain elements already present in the pre-war crisis.

Pierangelo Schiera - Preußisch Blau
The blue color of the uniform worn by Frederick the Great is the pretext used by the author to conduct a quick review of Prussian-German history over the last three centuries. The essay traces a synoptic view from the establishment of the first academic chairs in cameral sciences in 1717 up until the elimination of Prussia from the historical-geographical world map at the end of World War II. This view brings into prominence the color of melancholy in the historical events of Germany along the lines suggested by Dürer in his Melencolia I since 1514. On the one hand, the pragmatism of a people and its rulers, on the other, the capacity of accompanying growth with highest achievements in philosophy, the sciences, arts, and literature: these two traits have characterized and accompanied German history up to the catastrophe of National Socialism, but they have also allowed for the country’s rebirth in a spirit of democracy and social and cultural well-being. This paper is a tribute to the country that more than any other has expressed—in the last centuries of European history—the ambiguous and bipolar nature of modernity.