The Chinese Challenge to the Western Order 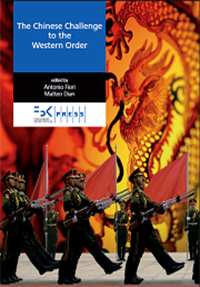 China’s extraordinary rise could represent a crucial challenge for the contemporary international order. Will Chinese ascent underpin a more prosperous and stable East Asia, or will it usher in greater uncertainty, contentious territorial disputes with its neighbors, and big power competition and conflict? Will Beijing become a responsible power socialized to international norms and institutions? Or will it seek to unilaterally restore a Sinocentric system in East Asia? This book explores the nature and the consequences of the Chinese rise and analyzes how other great powers and the Asian middle powers have reacted to it.

Rudi Bogni - Preface
Antonio Fiori and Matteo Dian - Introduction: The China Challenge. Opportunity or Threat?
I. Chinese Ideas on the World Order
Silvia Menegazzi - Exploring the Link between Traditions and Ideas in Chinese Foreign Policy. The Case of Responsible Protection
Barbara Onnis - The People’s Republic of China’s Ideological Challenge to the Liberal Order
Giampiero Giacomello and Matteo Dian - Friend or Foe? Chinese Strategic Thinking and the Transformation of the People’s Liberation Army
Antonio Fiori - A Thirsty Dragon. China’s Oil Diplomacy
II. Reactions to the Chinese Rise
Andrea Passeri and Antonio Fiori - Where Giants Meet: The Sino-American Soft-Competition in Southeast Asia. The Cases of Vietnam and Myanmar
Ekaterina Koldunova - Beijing and Beyond: Whither Russia’s Response to China and Asia’s Rise?
Matteo Dian - The Obama Administration and the Chinese Challenge: The Pivot and the Trans-Pacifi c Partnership

Antonio Fiori teaches International Relations of Asia at the University of Bologna. He has been a visiting fellow at the United International College (Zhuhai, PRC), East-West Center (Honolulu, USA), and Seoul National University (Seoul, Korea). He works in the fields of inter-Korean relations, North Korea’s domestic and foreign policy, and China’s foreign policy and energy diplomacy.

My perspective on China is that of an investor, trained as an economist. For me and for many others, investing in China has been like shooting at a moving target.

I have no reason to believe that it might be easier for those who observe China from the social, political, and economic perspectives and the impact it has on the rest of the world.

The Chinese Challenge to the Western Order is a most helpful academic contribution to identify the forces behind that target.

My personal exchanges with Chinese officials in the world of finance have been open and constructive and I found them—on the whole—prudent, realistic, and very well informed. At the same time, one of my former colleagues has run into problems for publishing an economic research document, which contained only publicly available information, deemed nevertheless too sensitive for worldwide dissemination. This happened a few years ago, but it could still happen today, if the circumstances warranted it.

I was hesitant and prudent in judging investments in China and very skeptical about fashionable investment theses, but I was not disappointed.

I have had the chance to meet some young Chinese academics and they are very outspoken about politics in their country. I met youngsters who were personally affected by the one-child policy and by the restrictions on internal migration. One of my friends could only recently legalize the presence of his ageing parents in his own city flat.

On an occasional visit with the delegation of the Head of State of a small European country, we were entertained in true imperial style by the Mayor of Shanghai, driven there in a convoy of black Mercedes 1000, a luxury never experienced in the West. Along the way, police officers in sharp suits and dark glasses jumped out of the motorcade to discipline rush hour drivers into giving way...
Leggi l'estratto