The Italian and German Dictatorships 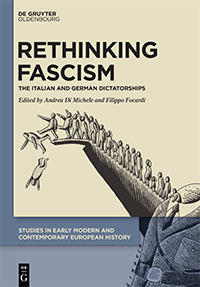 This book takes up the stimuli of new international historiography, albeit focusing mainly on the two regimes that undoubtedly provided the model for Fascist movements in Europe, namely the Italian and the German. Starting with a historiographical assessment of the international situation, vis-à-vis studies on Fascism and National Socialism, and then concentrate on certain aspects that are essential to any study of the two dictatorships, namely the complex relationships with their respective societies, the fi gures of the two dictators and the role of violence. This volume reaches beyond the time-frame encompassing Fascism and National Socialism experiences, directing the attention also toward the period subsequent to their demise. This is done in two ways. On the one hand, the uncomfortable architectural legacy left by dictatorships to the democratic societies that came after the war are examined. On the other hand, the book addresses an issue that is very much alive both in the strictly historiographical and political science debate, that is to say, to what extent can the label of Fascism be used to identify political phenomena of these current times, such as movements and parties of the so-called populist and souverainist right.

I. Fascism and Nazism in a Transnational Key

II. “Volksgemeinschaft” and the Relationship between Italian Society and Fascism

Frank Bajohr
From Debates on the Political Order to Visions of Community.
The Trajectories of Writing a Social History of National Socialism

III. The Dictators: Hitler and Mussolini

Wolfgang Schieder
Adolf Hitler and Benito Mussolini. The Staging of a Political Friendship

Sybille Steinbacher
“Spaces” of Violence. Reflections on a Popular Concept in Holocaust Research

V. Stone Fascism after the War

Albert A. Feiber and Thomas Schlemmer
Obersalzberg and the Axis.
State Visits between Idyll, Diplomacy, and Atrocity

VI. The New Right and Fascism

Matteo Albanese
CasaPound Italia and Forza Nuova. Back to the Future