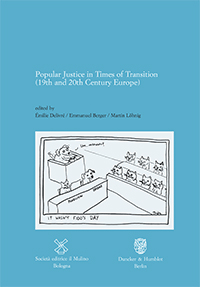 Stephen Banks is a Fellow of the Royal Historical Society and an Associate Professor in the School of Law at Reading University. He teaches in the areas of the interception of communications, surveillance law, and criminal justice. His research interests focus on the role of honor, shame, and violence in the construction of social norms. His current research is concerned with popular justice rituals, rough music, and normative behavior in rural communities.

Johann Chapoutot is Professor of Contemporary History at the University Paris-Sorbonne. A specialist of the history of Europe and of Germany, he is the author of seven books, translated into seven languages, among which The Law of Blood, published in 2014 in French (Paris, Gallimard) and 2017 in English (Cambridge, Harvard University Press), and Greeks, Romans, Germans. How the Nazis usurped Europe’s classical Past (University of California Press, 2016).

Emilie Delivré is a researcher at the Istituto storico italo-germanico in Trento of the Fondazione Bruno Kessler since 2011. She studied in France, Germany, Italy, and Spain and was visiting fellow at the University of Montpellier as well as Tunis. She holds a PhD from the European University Institute Florence on popular politicization and religious practices (1780-1850). Her publications include Le catéchisme politique allemand: un prêche sur l’autel du citoyen (2014) and, with Emmanuel Berger, Popular justice in Europe (18th-19th Centuries) (2014).

Arnd Koch, born in 1967, studied law in Constance and Freiburg, and got legal training in Berlin. He earned his PhD in Freiburg, his Habilitation in Jena. Since 2010 he is Professor of Criminal Law, Criminal Procedure Law, and the History of Criminal Law at the University of Augsburg. His current research focus is on the history of criminal law in the 19th and 20th centuries.

Carlotta Latini is Professor of Legal History at the University of Camerino, Marche, Italy. She teaches Legal History at Camerino and at the University of Chieti-Pescara. Her main interests are modern legal history, in particular constitutional history and criminal history, and the history of military penal law. She is author of many books and essays on these issues, like, Cittadini e nemici. Giustizia militare giustizia penale in Italia tra Otto e Novecento (Firenze, Le Monnier, 2010).

José Antonio Pérez Juan is Professor of Law at the Universidad Miguel Hernández de Elche. He studied local and central administration and recently dedicated his work to the analysis of the validity and application of fundamental rights in the first period of the 19th century. His published work includes La Censura Liberal: mecanismos de control de la prensa en las Cortes de Cádiz, which received an award from the Fundación Centro de Estudios Constitucionales Cádiz 1812. He has also been a guest lecturer at the University of Messina in Italy and the Universities of Würzburg and the Freie Universität Berlin.

Mareike Preisner, LL.M. ist a civil judge. She was born 1982; she studied law and canon law in Regensburg and Vienna. From 2008-2015 she worked with Prof. Dr. Löhnig at the university of Regensburg where she also earned her PhD in 2013. She has published in new and recent legal history and current family law.

Alexey Tikhomirov is a Research Fellow in East European History at the Goethe-Universität Frankfurt am Main. He has published The Best Friend of the German People: The Stalin Cult in East Germany, 1945-1961 (Moscow: ROSSPEN, 2014) in Russian in the internationally acclaimed series «History of Stalinism». He is currently working on a book entitled Forced Trust: Emotional Bonds between People and State in Soviet Russia (1917-1991), A History of Trust and Distrust.