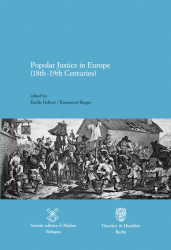 “Popular justice” can be roughly defined as “the exercise of justice by the people”. The institutions and practices pertaining to this form of justice vary widely across time and geographical space.
The 18th and 19th centuries constitute a key historical period for the transition to popular justice in Europe. On the one hand, many long-standing practices (“ducking”, “Rügegerichte”) were progressively called into question. On the other hand, the democratization of European societies and the progressive advent of political liberalism helped bring about the emergence of an institutionalized popular justice with the establishment of institutions such as the justice of the peace and the jury. The legitimacy of popular justice remained nonetheless weak due to the government’s fear of losing control and regal powers. Its establishment further depended on the degree of modernisation of the States, which for the most part remained firmly anchored in the Ancien Régime.
Despite the importance of popular justice during the 18th and 19th centuries, scholars have largely ignored this field of research or have limited their study to a national perspective. The very definition of popular justice remains vague and requires further conceptual analyses. This book offers a comparative overview of the history of popular justice in France, Germany, Italy, the Netherlands, Belgium, and England and sets the foundations for future research.

I. Justice of the Peace
Michael Broers - The «Juges de Paix» of Napoleonic Europe
Giuseppina D’Antuono - Popular Justice in Europe. The Justice of the Peace, a «popular» French Magistracy in the Kingdom of Naples
II. «Jurés» and Laymen
Emmanuel Berger - The Criminal Jury in England and France in the Late 18th Century. Historiographical Issues and Research Perspectives of Popular Justice
Bram Delbecke - «Le fruit du terroir?». The Debate on Trial by Jury in the United Kingdom of the Netherlands (1814-1831)
Martin Löhnig - Introducing the Participation of Laymen into the Judicial System of 19th-Century Germany. The Example of Bavaria

Michael Broers is Professor of Western European History at the University of Oxford. His The Napoleonic Empire in Italy, 1796-1814. Cultural Imperialism in a European Context? (Palgrave, 2005) won the Prix Napoléon of the Fondation Napoléon; he was a Visiting Member of the Institute for Advanced Study, Princeton, 2003. His latest book, Napoleon, Soldier of Destiny, was published by Faber & Faber, in March, 2014.

David Churchill is Economic History Society Anniversary Research Fellow at the Institute of Historical Research in London. His work concerns the contribution of the police and the public to crime control in 19th-century Britain. He has researched policing and civilian responses to crime in industrial cities, and is currently working on security and the lock and safe industry. He has published in Crime, Histoire et Sociétés / Crime, History and Societies, Social History and Urban History.

Giuseppina D’Antuono completed a PhD in «Storia dell’Europa mediterranea». She is a teaching assistant in Modern History at the University of Naples S. Orsola Benincasa. Her research focuses on the Enlightenment and the Napoleonic Era, especially on the relations between France and the Kingdom of Naples (18th-19th centuries). She has published Les juges de paix dans le Royaume de Naples à l’époque napoléonienne, in «Cahiers de la Méditerranée»; Diderot en Italie is forthcoming.

Bram Delbecke (1980) studied history and law at the Catholic University of Leuven. From 2003 to 2010, he was a teaching assistant at his alma mater. In 2010, he presented his PhD on the history of the freedom of the press in nineteenth-century Belgium. After his PhD, he was a postdoctoral researcher affi liated with the Flanders Research Foundation. In 2013, he left academia and joined the bar. His research focuses on the history of press offences, political offences, jury trials, and constitutionalism.

Émilie Delivré (1979) studied at the Universities of Toulouse-le Mirail, Halle-Wittenberg, the Freie Universität Berlin, and Valladolid. She holds a PhD from European University Institute Florence on political catechisms in Germany and Europe (1780-1850). She has published in several languages on political communication and popular justice in the Sattelzeit. She is a researcher at the Istituto storico italo-germanico of the Fondazione Bruno Kessler since 2011 and teaches at the University of Trento.

Peter King is Professor of English Local History in the School of History at Leicester University, England. He has written extensively on the history of criminal justice including two books: Crime, Justice and Discretion in England 1740-1820 (Oxford 2000) and Crime and Law in England 1750-1850; Remaking Justice from the Margins (Cambridge, 2006). He is currently writing a book on The History of Execution Practice and the Post-Execution Punishment of the Criminal Corpse 1700-1834.

Martin Löhnig is Professor of Civil Law, German and European Legal History, and Canon Law at the University of Regensburg since 2008. Born in Nürnberg in 1971, he received his Dr. iur. (Univ. of Regensburg) in 2001 and his Dr. iur. h abil. (Univ. of Regensburg) in 2006. From 2005-2008 he was Professor of Civil Law, Legal History an Canon Law at the University of Konstanz. For a list of his publications, see www. martin-loehnig.de.