The Mediatization of War and Peace

The Role of the Media in Political Communication, Narratives and Public Memory (1914-1939) 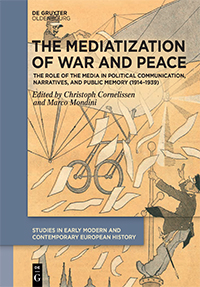 During the First World War, mass media achieved an enormous and continuously growing importance in all belligerent countries. Newspaper, illustrated magazines, comics, pamphlets, and instant books, fictional works, photography, and the new-born “theater of imagery”, the cinema, were crucial in order to create a heroic vision of the events, to mobilize and maintain the consensus on the war. But their role was pivotal also in creating the image of the war’s end and finally, together with a widespread, new literary genre, the war memoirs, to shape the collective memory of the conflict for the next generations. Even before November 1918, the media raised high expectations for a multifaceted peace: a new global order, the beginning of a peaceful era, the occasion for a regenerating apocalypse. Likewise, in the following decades, particularly war literature and cinema were pivotal to reverse the icon of the Great War as an epic crusade and a glorious chapter of the national history and to create the hegemonic image of a senseless carnage. The Mediatization of War and Peace focalizes on the central role played by mass media in the tortuous transition to the post-war period as well as on the profound disenchantment generated by their prophesies.

I. Visualization of War – Narratives of War

Christoph Cornelissen
When History Went Public. German Historians and Their Journalistic Work during the First World War and Its Aftermath

Hannes Leidinger
Visualizing the War. World War I as a Caesura in the History of (Visual) Media: A Relativization

Federico Mazzini
Mechanical Vaudeville. Popularization of Science and the Trivialization of War in the US (1915–1918)

Michael S. Neiberg
“Where Did the Fourteen Points Go?”. The American Media and the Shantung Controversy

Étienne Boisserie
Asserting Czechoslovak Authority in Slovakia. Context and Obstacles in the Immediate Aftermath of the Great War

III. From Hope to Disenchantment

Laurence van Ypersele
The Media and the Transition from War to Peace. The Role of the Media in the Popular Violence of November 1918, Belgium

Giovanni Bernardini
Media, Propaganda, and Revolution. France and the International Spread of Bolshevism in the Wake of World War I

Angelo Ventrone
The Italian Paradox: The Italian Media and the Myth of the Mutilated Victory

Pierre Purseigle
Devastated Victors. Reconstruction and the Urban Transition from War to Peace in Western Europe

IV. The Memory of Peace and the Media –
National and Regional Contexts

Peter Haslinger
Visions of Stability and Anxiety. The Mediatic Building of Nations and Border Regions, 1918–1930

Barbara Bracco
The Failed Exit from the War. The Problematic Return of Veterans and War Wounded in the Media (1918–1945)

Gabriele D’Ottavio
When the Decline of Europe Turned Topical. From World War I to Peace

Maurizio Cau
The Execution of Cesare Battisti. Representation and Memory of a Media Event