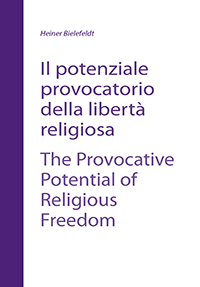 The Provocative Potential of Religious Freedom

Heiner Bielefeldt was born in 1958 in a village near Aachen. He studied philosophy, catholic theology, and history at the universities of  Heiner Bielefeldt Bonn and Tübingen. In 1989, he completed his PhD thesis on social contract theories (Hobbes, Locke, Rousseau, Kant, Rawls) and their impact on contemporary constitutional theory. In 2000, he finished his Habilitation at the University of Bremen with a thesis on the philosophy of human rights. He held teaching positions in different faculties at the universities of Mannheim, Heidelberg, Toronto, and Bielefeld. From early on, Bielefeldt became interested in human rights issues, both as an activist and as and academic.

Between 2003 and 2009, he served as Director of the German Institute for Human Rights (based in Berlin), which is the officially accredited national human rights institution of Germany.

In 2009, he took the newly established chair of human rights and human rights politics at the university of Erlangen-Nuremberg. Since 2010, Bielefeldt served as the UN Special Rapporteur on freedom of religion or belief, which is a worldwide mandate. In this capacity, he undertook country inspections and presented reports to various UN forums. In November 2014, Bielefeldt received an honorary doctorate from the catholic theological faculty of the University of Luzern.

Since September 2016, he also holds the position of a Professor Two at the Human Rights Centre of the University of Oslo. Bielefeldt’s research interests include different interdisciplinary facets of human rights theory and practice, with a particular focus on freedom of religion or belief.