Gendered Ways of Knowing in Science 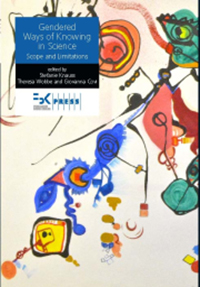 For more than a generation, scholarship on gender and/in science has been predominantly dedicated to two strands of disccusione: While one prominent line of research has been concerned with women's inroads into science and their careers within its system, another branch of research has remained focused on the problem of how science, its content and its cultural practices, are coloured by gender. Despite this intriguing and differentiated research "gender" has acquired the somewhat stable and taken-for-granted meaning of sexual difference. This volume proposes a reflection on the practices of establishing and using "gender" and its conceptual and practical history in the life of science, showing thus both the scope and the limitations of gendered ways of knowing.

Stefanie Knauss, Theresa Wobbe and Giovanna Covi - Introduction
I. Views on this something “Gender”
Barbara Duden - De-gendering Ways of Knowing: Contemporary Paradoxes from a Historian’s Perspective
Stefan Hirschauer - Gender Differentiati on in Scientific Knowledge: Gender Studies and Sex Studies as Unwitti ng Siblings
M. Cristi na Amoretti and Nicla Vassallo - On the Independence of the Social and Situated Dimensions of Scientific Knowledge from the Notion of Standpoint
Theresa Wobbe - Statistical Ways of Knowing Gender: Open Questions from a Sociological Perspective
II. Boundaries of Gender in Sciences
Catherine Vidal - The Sexed Brain: From Neurosexism to Neuroethics
Marlen Bidwell-Steiner - Arguments about Female Defi ciencies in Changing Discursive Clothes: From the “Humournome” via the Genome to the “Hormonome”
III. Going beyond the Western Context?
Sandra Harding - Postcolonialism and Science: Gender Issues
Table of Contents
Heidemarie Winkel - Gender Knowledge in the Arab-Islamic Realm: On the Social Situatedness of Gender as an Epistemic Category
IV. Organisation of Sciences and Work?
Annalisa Murgia - Gendered Ways of Knowledge Work? Stories of Gender Hegemony and Resistance in Temporary Jobs
Teresa Rees - Mainstreaming Gender in Research: Lessons from Europe
Stefanie Knauss - Thoughts aft er Gendered Ways of Knowing

Stefanie Knauss studied theology and English in Germany, Austria and the UK. As visiting scholar, she is affiliated with Köln University and Humboldt University, Berlin, focusing in her research on the role of the body in religions, gender studies and queer theory in theology and the interaction between media and theology.

Theresa Wobbe, historian and sociologist, is a professor of sociology of gender at the University of Potsdam (Germany). Her re-search focuses on shifting gender concepts in a national, European and global perspective as well as on kinds of categorisation and statistical classification from the perspective of a sociology of knowledge.

Giovanna Covi teaches Anglo-American literature, gender studies and critical theory and is board member of the Centro Studi Interdisciplinari di Genere at the University of Trento (Italy). She has been group coordinator in the European research network Athena 2 and 3 and is active in AtGender. Her research on US and Caribbean literatures is focused on issues of gender, race and citizenship.

For more than a generation, scholarship on gender and/in science was predominantly dedicated to two strands of discussion. While one prominent line of research has been concerned with women’s inroads into science and their careers within its system, another branch of research remains focused on the problem of how science, its content and its cultural practices are coloured by gender. Gender and science studies have principally been concerned with the study of recruitment to research and professional organisations and of science’s content and cultural style. These approaches reflect both the scope of “gendered ways of knowing” and their limitations.

Its scope is indicated by studies which are concerned with questions of gendered exclusion from and inclusion in sciences, their organisation and practices. To this end, gender studies have not only been concerned with the study of the relationships between the sexes and the social and scientific creation of gender and gender roles, but also with the gendering of ways of knowing themselves: in particular when comparing methodologies and presuppositions in natural sciences and humanities, a certain way of grasping reality along the boundaries of sexual difference is noticeable. The objective, rational, apparently omniscient perspective of modern sciences is shaped by a distinctive masculine approach, which has an impact on natural sciences and humanities as well as their research cultures. The metaphors of linear scientific progress and the hermeneutical circle testify to this gendering of scientific fields, instruments and scholars.

Despite this intriguing and differentiated research, “gender” has acquired a somewhat stable and taken for granted meaning of sexual difference. “This something gender” (Barbara Duden) has become a given assumption, so that the practices of using gender are no longer reflected: using gender without observing the difference it implies attributes ...
Leggi l'estratto