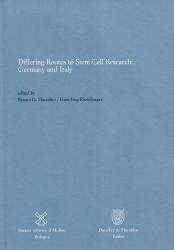 Stem cells have been in the center of a heated biomedical and biopolitical debate in the first decade of the new millennium. Ethical concerns prevailed.
The present volume follows the controversial discussions on stem cells in Italy and Germany, respectively, over the past 15 years. It aims at an assessment of the situation, and its method is comparative.
The first part of the book takes a step back and sheds light on the early history of views on stem cells and on cellular reprogramming from the middle of the nineteenth to the end of the twentieth century.
Part two and three have a close look on the recent developments in Germany and in Italy from three different viewpoints: the state of the art in scientific research, the public debate on its perceived promises and dangers, and the political and legal regulations that followed.
It turns out that, despite their cultural and geographical vicinity, there are significant national differences in the discursive and juridical strategies followed in both European countries.

I. Introduction
Renato G. Mazzolini - The Weight of the Past
Hans-Jörg Rheinberger - A Revolution in Biology?

- "…an interesting contribution to the history of biomedical innovation in the second half of the twentieth century. / Differing Routes to Stem Cell Research provides important insights on intersections between biomedical research and politics. / … an excellent contribution..." - Ilana Lowy, Differing Routes to Stem Cell Research: Germany and Italy, in "Bulletin of the History of medicine", 87 (2013);