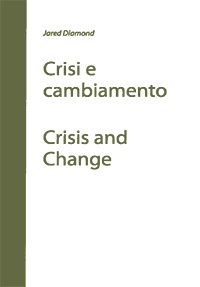 Jared Mason Diamond (Boston, MA, 1937) is an accomplished scientist and polymath best known for his wide-ranging research interests regarding the human kind in its relationship with the environment. Along with technical and academic works, highly appreciated for their significant and original contribution to the international scientific debate, his extensive production comprises several writings spanning from anthropology to philosophy and history.

A key to understanding the ease with which Diamond can move across such apparently distant disciplines may be found in the particular relationship that he established between his original training in physiology and the intellectual trajectory-professional, but also human-that he developed on those grounds.

After graduating from Harvard in 1958 and receiving his PhD from Cambridge in 1961, Diamond’s work focused initially on cellular and molecular mechanisms of ion, water, and nonelectrolyte transport across biological membranes. More recently, his scientific interests have shifted to evolutionary physiology. At the same time, Diamond has also pursued a career in ecology and evolutionary biology, based on an on-going series of expeditions to study the birds of New Guinea and other tropical Southwest Pacific Islands. These expeditions have done much to clarify the ecological assembly of species communities, the factors controlling extinction and immigration and species diversity, and the mechanism of allopatric speciation in seemingly uninterrupted expanses of tropical habitats.

Diamond combines this academic research in population biology with practical efforts to stem the accelerating disappearance of the world’s biodiversity. These efforts are also recognizable in Diamond’s historical-anthropological and socio-political studies, of which the Bruno Kessler Lecture presented here is part. Here another element emerges from his geographical and naturalistic travel experiences, which was also the subject of numerous articles published in prestigious journals in the field, namely, a marked taste for exploration that turned from a personal characteristic to a methodological constant in his research, pooled with the distinctly experimental approach typical of a pure scientist.

In Diamond’s writings, the point of contact between the naturalistic sphere and the human sciences is represented by genetics. He regards genetics as fundamental for an adequate definition of the human biological dimension as a starting point for a deeper and more authentic analysis of the social dimension in a historical perspective, paying particular attention to the challenges of contemporary societies.

Diamond’s unmistakable style of writing, which successfully combines literary elegance and effective communication, has contributed to his extraordinary critical and popular success, earning him a series of prestigious awards and international prizes.