Christianity and Violence in the Middle Ages and Early Modern Period

Perspectives from Europe and Japan 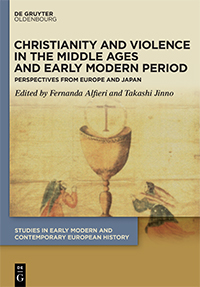 The volume explores the relationship between religion and violence in Europe from the Middle Ages to the Early modern period, involving European and Japanese scholars. It investigates the ideological foundations of the relationship between violence and religion and their development in a varied corpus of sources (political and theological treatises, correspondence of missionaries, pamphlets, and images).

Debora Tonelli
From Divine Violence to Religious Violence. A Socio-Political Interpretation of Exodus

Serena Ferente
“Nothing violent can last”: Nature, Violence, and Political Legitimacy in a Scholastic Formula

Takashi Jinno
Tyrannicide as an Act of Divine Justice. The Doctrines of Tyrannicide of John of Salisbury and Juan de Mariana

Kazuhisa Takeda
The Global Expansion of Christian Violence in the Old and the New World. From Early Church Fathers to the Jesuits

Giovanni Ciappelli
The Privateering by the Knights of Saint Stephen against Turks and Barbary Pirates. Violence and Religion in Seventeenth-Century Printed News Narratives